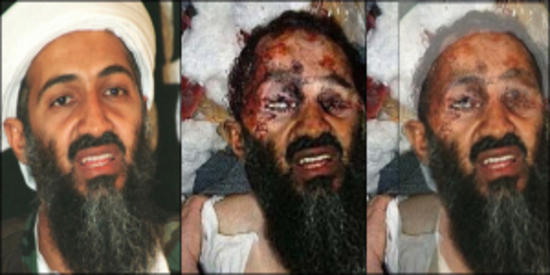 Nothing happens in the current administration without Obama’s sign off.

Perhaps the easiest explanation is the simplest, SEAL TEAM VI did not kill Osama bin Laden.

Would that bird be willing to sing?

But wait ! we have the assurance and a death certificate that seems to seal the deal.

Of course we all know that Barack Hussein Obama would never lie !

The CIA official who led the hunt for Osama Bin Laden is being removed from his post, it has been revealed.

The head of the agency’s Counter­terrorism Center, who also directed drone campaigns which killed thousands, has been in the position for nine years and is described as a ‘true hero’.

His move is part of a major restructuring under CIA director John Brennan, and ends a tenure which has seen the center become a paramilitary unit, The Washington Post reported.

The official, who has not been fully named by the paper as he is still undercover, is a convert to Islam and is believed to be in his 50s.

The head of the United States’ CIA John, Brennan is a converted Muslim, what the hell is that all about?

The CIA official who led the hunt for Osama Bin Laden is being removed from his post as part of director John Brennan’s (pictured) restructuring. The agency veteran has been described as a true hero.

Known by his agency identity Roger, he presided over a campaign of espionage and armed drone strikes that have killed both terrorists and civilians.

Many of Al Qaeda’s most influential leaders have been slain under his leadership, but the main threat has since shifted to ISIS.

In a Post profile written in 2012, he was described as chain-smoker and ‘not at all a team player’ by colleagues.

He was also the basis for the character ‘The Wolf’ in the film Zero Dark Thirty and is said to have spent hours on the treadmill reading terrorism reports.

But agency spokesman Dean Boyd paid tribute to the senior official as news of his departure surfaced.

He said: ‘After nearly a decade of outstanding work in this post, including the take down of countless terrorists and many other successes in protecting the country, he will be moving on in connection with the CIA modernization plan announced last month.’

Roger is believed to be staying on at the CIA and will be reassigned. His successor is known as Chris and is said to be an agency veteran who has already been in a number of high profile positions

Earlier this month Brennan ordered a sweeping overhaul of the spy agency, aimed in part at sharpening its focus on cyber operations and incorporating digital innovations into traditional intelligence gathering.

Known by his agency identity Roger, he was the basis for the character ‘The Wolf’ in Zero Dark Thirty (not pictured). Kyle Chandler (left) and Jessica Chastain (right) during one of the scenes

The move was prompted after nine outside experts spent three months analyzing the agency’s management structure.

These included what deputy CIA director David Cohen called ‘pain points’ – or organizational areas where the CIA’s bureaucracy does not work efficiently.

US officials said that Brennan decided the agency had to increase the resources and emphasis it devoted to cyberspace because advanced communications technology is rapidly becoming pervasive.

Historically, electronic eavesdroppers at the National Security Agency have been at the cutting edge of digital innovation within the US government. But the CIA felt that it too had to reorganize to keep up with the technological ‘pace of change,’ as one official put it.