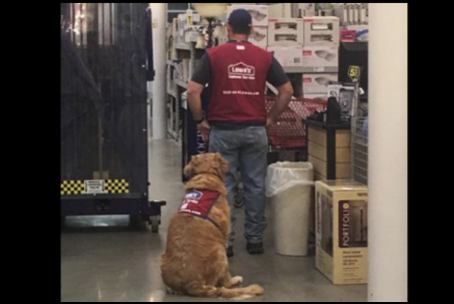 Times are tough for the average American looking for a job but when you figure in a disability that requires a service dog be present at all times that task seems an impossibility. For Air Force veteran, Clay Luthy, a job became a reality when a Lowes store in Abilene, Texas hired him and his 10-year-old service dog.

According to The Huffington Post, Clay, 35, had endured several knee surgeries that kept him from reenlisting in the Air Force. Because he needs his service dog, Charlotte, with him in case of falls, it was a struggle to find work.

Though Luthy’s line of work after the military had mainly been handy-man gigs. His wife, however, suggested he apply at the store in which he spent so much time, Lowes.

Jay fellers, a human resource manager for Lowes, stated, “We were interviewing people for his position. And he was one of the applicants. And so he showed up for the interview and he had Charlotte with him.”

Lowes has always allowed well-behaved non-service dogs in their stores but what most people may not know is they also have an undisclosed number of service dogs working at various locations.

Fellers felt that Luthy was the best person for the job. “So, we went through the interview process and Clay and his own merit won the job. And we knew he was gonna make a great employee – we just got the benefit of getting Charlotte right along with him.”

Over the last two months of employment with Lowes, the duo has been a huge hit as they both perform their jobs in matching vests.

Judy Decher Rose, a Lowes customer, went to Facebook with her excitement over the unusual hiring.

Judy Rose’s husband, Brian, a retired veteran, told The Washington Post, “So I was actually impressed, one, that they hired a disabled vet, but also [a vet] with a dog. Because the dog could be a liability if somebody tripped over him or if something happened to a customer . . . and they took the chance on him anyways, and I thought that’s pretty awesome.”

Well, Rose’s Facebook post went viral in no time being shared almost 200 thousand times thus far. Praise for Lowes continue to pour in as the likes and shares to the Facebook post go ever higher.

A spokesman for Lowes reaction to the whole media frenzy is nothing short of modest as he stated that hiring the two was “simply a matter of accommodating a qualified employee,” according to The Washington Post.

Not only has Charlotte, the retriever, won the hearts of customers but so has Lowes and their willingness to work with the brave heroes that serve our country proudly and selflessly.

23 thoughts on “Disabled Air Force Veteran in Need of Work is Hired at Lowes, Along with His Service Dog”