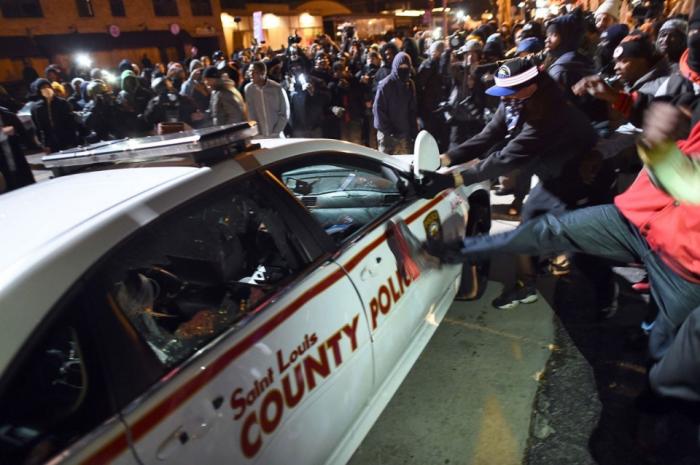 ACORN’s successor group in Missouri has been paying protesters $5,000 a month to generate civil unrest in Ferguson, the troubled St. Louis suburb where black youth Michael Brown was killed by a white police officer last August.

We know this because some of the protesters haven’t been paid and, now, they are demanding what they were promised. They held a sit-in at the offices of Missourians Organizing for Reform and Empowerment (MORE) and posted a demand letter online.

MORE is the rebranded Missouri branch of the former Association of Community Organizations for Reform Now (ACORN) which filed for bankruptcy in late 2010. That ACORN state chapter reconstituted itself in December 2009 as MORE under orders from ACORN’s national headquarters. President Obama used to work for ACORN and he represented it in court as a lawyer. (See my previous article on MORE.)

MORE has been active in the Ferguson protests and in efforts to free jailed demonstrators so they can continue vandalizing businesses, intimidating perceived adversaries, setting fires, throwing projectiles and human waste at cops, and engaging in the Left’s usual modes of so-called nonviolent protest. MORE believes that protesters should be given a blank check to inflict whatever harm they wish on the community in pursuit of social justice.

The unpaid rent-a-mob operatives complain that MORE stiffed them the same way ACORN did to hired protesters throughout its 40 years of radical left-wing rabble-rousing. The ACORN network’s leadership was always predominantly white while its foot soldiers were mostly non-white, a fact that caused tension within the criminal community organizing outfit.

Blogger Kristinn Taylor reported at St. Louis-based blogger Jim Hoft’s website, Gateway Pundit, that “[b]lack activists held a sit-in at the office of MORE … on Thursday to press their claim that groups led by whites have collected tens of thousands of dollars in donations off of the Black Lives Matter movement without paying the Black participants their fair share.”

One of the angry protesters can be observed threatening MORE executive director Jeff Ordower, a bald white man, in a video posted to the Twitter account of @search4swag on May 14 with the hashtag #CutTheCheck.

“We gonna just fuck you up,” she said to Ordower from across a boardroom-style table.

In his online biography, Ordower boasts that he was “one of a group of founders of the Chicago based organization Gender Just, which merged queer, class and racial justice.”  The bio states that he “is welcoming co-conspirators in attempts to scale up numbers of radical organizers who can financially support themselves in the work.”

In other words, Ordower admits that paying organizers isn’t exactly a priority for him.

Immediately below is the statement MAU posted:

On May 14, 2015 many individuals and organizations of the protest movement that began in Ferguson, Missouri organized a sit-in in the office of Missourians Organizing for Reform and Empowerment (MORE). The demand was simple: Cut the checks.

Early in the movement, non-profit organization MORE, formerly known as the St. Louis chapter of ACORN, and local St. Louis organization Organization for Black Struggle created a joint account in which national donors from all over the world have donated over $150,000 to sustain the movement. Since then, the poor black [sic] of this movement who served as cash generators to bring money into St. Louis have seen little to none of that money. Furthermore, since the influx of funding has started, poor black people continue to take to the streets all the while losing their homes, vehicles, ability to feed themselves and their families, and suffering from trauma and mental illness with no ability to afford quality mental health services. Questions have been raised as to how the movement is to sustain when white non-profits are hoarding monies collected of off [sic] black bodies? When we will [sic] hold the industry of black suffering accountable? The people of the community are fed up and the accountability begins here and now.

This isn’t about MORE. This is about black lives in the Black Lives Matter movement who are literally broke and starving. There is an insidious strand of racism and white supremacy that exists in this movement and it is called the Non-Profit Industrial Complex. As a by-product, it provides decent salaries and comfort to many people who are not affected by the disparities that they are trying to address. This money is typically in the hands of white people who oversee the types of services that the non-profit provides, while having select token black people to spearhead the conversations within and to the community.

We NEED to be thinking about justice for black people. This means white people must renounce their loyalty to the social normalcy that maintains white power and control. If black lives really matter, justice and self-determination for black people would mean the black community would control it’s [sic] own political and economic resources.

It is asinine to believe that black people can continue to organize and take to the street when they can barely meet their basic needs. In St. Louis, organizers and protesters depleted $50,000 of the available funds and dispersed it among the people in the movement in no particular order. Jeff Ordower, executive director of MORE, stated that another $57,000 is expected in the next one to two weeks in which those funds will also be dispersed to the black people in the movement.

Moving forward, we are building a board of accountability within this movement.  We must funnel economic into this movement through the hands of black people who are fighting with and for black life. More on this board will be discussed as we develop.

So MORE doesn’t seem to be strapped for cash.

MORE and other groups supporting the Black Lives Matter movement have received millions of dollars from radical America-hating financier George Soros (net worth: $24 billion). In the fall MORE even created an Amazon wedding registry so supporters could donate rioting supplies. And yesterday it was reported that hip hop performer Jay-Z and his wife Beyoncé (combined net worth: over $1 billion) wired tens of thousands of dollars to help bail out protesters jailed in the Black Lives Matter riots in Ferguson and Baltimore. Perhaps that money went to MORE.

Regardless of the circumstances, when a representative from CAIR, the Council on American-Islamic Relations, a group with close ties to Hamas, is allowed into the White House, a serious, indeed dangerous, problem exists.

One day after the brutal death of his cousin – a revenge attack following the murder of three Israeli teens – Tariq Abu Khdeir, a 15-year-old boy who had traveled to Israel from Tampa, Florida, found himself arrested and beaten by an Israeli officer. On the day of his being taken into custody, authorities alleged Khdeir was masked, armed and actively participating in rioting against officers. They said, as well, he had resisted arrest.

A video purporting to be of the beating went viral, and an Israeli investigation into the footage commenced.

While Khdeir claimed total innocence in the matter, and to be sure, months later, the charges against him were dropped, his family’s choice of an attorney for his case makes Khdeir’s claim of innocence highly suspicious, if not an outright lie. Throughout the process, the lawyer representing Khdeir was Hassan Shibly, the Executive Director of the Florida chapter of CAIR.

CAIR was established in June 1994 as being part of the American Palestine Committee, an umbrella organization acting as a terrorist enterprise run by then-global Hamas leader Mousa Abu Marzook. Marzook was based in the U.S. at the time and currently operates out of Egypt as a spokesman for Hamas. In 2007 and 2008, amidst two federal trials, the U.S. government named CAIR a co-conspirator in the raising of millions of dollars for Hamas.

In November 2014, just six months ago, along with ISIS, al-Qaeda and Boko Haram, CAIR was listed as a terrorist organization by United Arab Emirates (UAE).

Hassan Shibly has exhibited his own radical behavior.

Shibly is an admirer of controversial Islamic lecturer Khalid Yasin who, during a 2005 interview, stated the following about non-Muslims and homosexuals: “There’s no such thing as a Muslim having a non-Muslim friend. If you prefer the clothing of the kafirs over the clothing of the Muslims, most of those names that’s on most of those clothings is faggots, homosexuals and lesbians.”

Fox News host Megyn Kelly recently pointed out on her show that, for at least four years, Shibly has referred to himself as a “fan” of Yasin and/or labeled Yasin an “interest” on his personal Facebook page. This, after Shibly had been warned years before about Yasin.

In December 2004, Shibly was detained by U.S. Customs and Border Protection, while crossing over the Canadian border, following a conference he had attended in Toronto. The conference was ‘Reviving the Islamic Spirit,’ and according to the Investigative Project on Terrorism, it featured a number of extremist speakers including notorious anti-Semite Louis Farrakhan and neo-Nazi William Baker.

About Shibly’s and others’ detentions, a border spokesman stated, “[W]e have credible, ongoing information that these types of conferences have been used and are being used by terrorist organizations to not only transport fraudulent documents but to mask travel by terrorists.” According to Shibly, he was “led by three armed officers” into a room “for questioning and fingerprinting.” He was told to stand face-first against the wall with legs spread for a pat-down search. He said he was “treated as a suspect.”