Many Americans remain a bit confused as to why there seems to be a double standard in our government when dealing with appropriate punishment for the mishandling of classified information, and with good reason.

In May, Petty Officer First Class Kristian Saucier plead guilty to and is currently serving a one year sentence in federal prison for violation of the Espionage Act, though no charge of espionage was ever filed. His crime, he used his cellphone to take 6 photographs while he was in a “classified area of a submarine,” the USS Alexandria. reports Fox News Insider.

Saucer, after learning he was under investigation, destroyed a camera, memory card and a laptop computer.

Six Photographs, destroyed evidence and a year in prison. He did the crime and he should do the time. But why isn’t every American citizen held to this same accountability standard?

The FBI have been investigating Hillary Clinton’s mishandling of classified information for some time and new evidence keeps piling up. Yet, not only is she still in the running for the presidency of the United States, but she has not received so much as a slap on the hand when it has been proven that she indeed has mishandled classified information.

Regardless of which side of the political arena you play on, this double standard should unnerve you.

Clinton also erased 33,000 emails and destroyed several computers, thus destroying evidence. Hillary, however, escaped any accountability and she was deemed cleared of any charges.

Blogger, Ed Morrissey, wrote, “The DOJ is willing to prosecute a former sailor to the full extent of the law for violating the law on classified material, in a situation where there was no purposeful unsecured transmission of classified material. “Will they pursue Hillary Clinton and her team, at the other end of the power spectrum from the rank-and-file, for deliberate unsecured transmission of improperly marked classified nat-sec intelligence? Will they pursue the same kind of obstruction of justice charges for Hillary’s wiping of her server as they are for Saucier’s destruction of his laptop?”

Mr. Morrissey, you pose very good questions! Perhaps the latest scuttlebutt will produce more desired results, though I must admit I am skeptical.

While investigating Anthony Weiner for inappropriate sexting with a minor, the FBI came across and obtained a warrant to look through 650,000 emails from Hillary’s private server on a laptop seized at the Weiner residence.

They are not duplicate emails. In fact, the emails in question have never been seen before, according to Fox’s Bret Baier.

Though it remains to be seen how significant or relevant these emails are to the investigation the bottom line remains the same. Hillary not only mishandled classified information and destroyed evidence she allowed emails (many most likely classified) from an unsecured server to be sent to an unsecured laptop.

More importantly, just what were in the missing 33,000 emails that Hillary erased?

Why does the FBI turn the other cheek when clearly Hillary is guilty, at the very least, of the same crime Saucier was imprisoned for? Why the double standard and what does that say of our current administration?

Former director of the government’s Information Security Oversight Office, Bill Leonard said, “It is exceedingly common for people in the military to be held accountable for classified information violations, much more so than in the civilian government or contractor world.”

Why is that? Hillary Clinton is running for the highest position this great nation holds and her ability, or inability, to handle sensitive information is of the utmost importance. It should be more important for anyone running for the presidency to be able to handle classified information than anyone else on the planet.

Clearly, there is no crying in politics as Hillary smiles broadly while getting away with crimes that should be punishable to the fullest extent of the law. 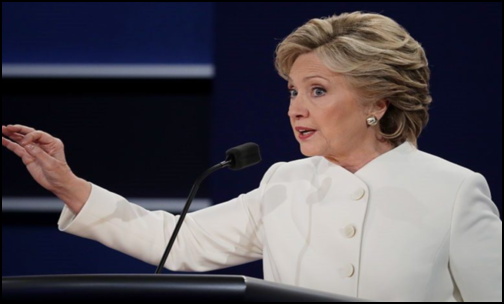 During the presidential debate on Wednesday Hillary Clinton, once again, revealed very classified information to the world.

Starr went on to say that even if the information is public knowledge, “if you know information to be classified, and you’re a government official, even if it’s in the open source, even if it’s on the Internet, you are not supposed to disclose it.”

When the president gives the order to launch a nuclear weapon, that’s it. The officer has to launch. It can take as little as four minutes.

“The bottom line is,” Star states, is “the US military [is] not especially thrilled to be discussing in precise detail what it takes to launch nuclear weapons.”

“But here is the bottom line: The U.S. military does not discuss the precise specifics of the time frames of launching nuclear weapons that, by all accounts, is extremely classified.”

Former Secretary of State Clinton should know better but clearly she does not. The information Clinton disclosed is Top Secret intelligence and is governed under the “U.S. Special Access Program (SAP) which dictates safeguards and protocols for accessing and discussing highly classified and Top Secret intelligence,” according to the Pentagon.

Because it took place during a political campaign the Pentagon refused to give any formal comment on the issue. It was clear to Starr, however, that the Pentagon was less than thrilled with Clinton. The Pentagon stated, off camera, that they were not happy at all “due to the secure nature of what she was discussing,” according to The Washington Free Beacon.

Starr stated, “We went to the military this morning and asked them. A military spokesman told us that they do not discuss operational timelines for launching nuclear weapons. “This is some of the most classified information. I asked Defense Secretary Ash Carter at a press conference earlier today. He declined to answer the question because it involved politics.”

Hillary has a past filled with negligence concerning the handling classified materials. American’s should be wondering just how capable she is of keeping classified information actually classified.

The first presidential debate between Hillary Clinton and Donald Trump starts tonight at 9 p.m. ET. While I know this has been around for a little while it was too good to pass up. So, to set the mood and get us all antiquated with specific terminology used by the candidates we present you with George Carlin as he deciphers hidden political language.

We are Silent Soldier and we approved this message:

(No politicians were injured in the making of this video presentation.)

I sure hope to be back on the keyboard by Monday (at least a little bit each day I hope) and can’t wait! Sure have missed you all…

So, in the meantime… Laugh your butts off!!!! 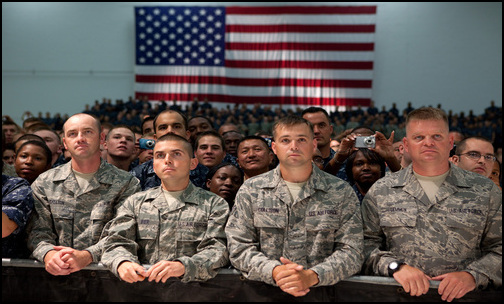 Members of the United States Military Paying Close Attention To a Speech Being Made.
(Photo: Public Domain)

The political presidential tug-of-war between Donald Trump and Hillary Clinton has spilled over into the military arena and the results of that may have an impact on the military’s ability to serve under the future president of the United States and the way it is viewed by the American people.

Perhaps for all the wrong reasons, presidential politics have centered around military staff, veterans and their families.

Bill Rausch, executive director of Got Your Six’s advocacy group, stated, “Yes, we’re talking about military families and veterans on the campaign trail, and that’s normally a great thing. But we’re not talking about anything of substance. If we can’t talk about veterans’ health and…military transition issues, then this is a wasted opportunity.”

Because both Trump and Clinton have given prominent roles to retired military officers and critics believe the military’s position to serve the next president, regardless of party affiliation, is jeopardized.

According to The Hill, there are officers in the military, both past and present, that don’t like what they are seeing politically.

In a letter to the editor of the Washington Post, Retired Gen. Martin Dempsey, previous chairman of the Joint Chiefs of Staff, stated, “The military is not a political prize. Politicians should take the advice of senior military leaders but keep them off the stage.”

Instead of keeping the military off of the political stage, media and campaign officials have placed them front and center in a series of scandals, most lately surrounding Trump.

Americans are bombarded with images of Trump having words with the father of an Iraqi fallen soldier and Obama saying he is unfit to serve because of a joke about a Purple Heart. And let’s not forget about the booing mother of a deployed airman at a Nevada rally.

These incidents all have one thing in common, to take the spotlight off of the real military issues being discussed by our presidential nominees.

Very little about our military and veteran reform strategies that have been proposed by either candidate have been discussed in the media. The strategies by both parties include overhauling veterans’ healthcare, defeating both terrorism and the Islamic State, and vowing for a stronger military.

Where is all the media coverage about our political parties plans? They are being upstaged by Democratic and Republican controversies.

This has a direct effect on our military and how American’s view them.

Joint Chiefs of Staff, Marine Gen. Joseph Dunford, stated that the next commander in chief needs to be confident that the military “is completely loyal and completely prepared to do what must be done.”

“Importantly, as an institution, the American people cannot be looking at us as a special-interest group or a partisan organization,” Dunford said.

American’s and politicians need to know that the military is politically color-blind, that they can unbiasedly carry out their missions. Americans also need to hear about the real issues plaguing our military and our veterans. Turning political conventions into military-themed scandals does nothing more than divert attention and up ratings.

Rausch stated that all the latest military attention isn’t really getting the important issues emphasized.

“In a vacuum, theses [conventions] have been good events to start the conversation,” he said. “But if starting to talk about military strategy and veterans issues was two steps forward, all of these controversies are at least one big step backwards.”

Stated by Hillary Clinton during a conference on domestic violence in San Salvador, El Salvador (17 November 1998).

At a campaign event on Thursday Hillary Clinton took the opportunity to bash Republicans by comparing them to “some terrorist groups” with “extreme views about women.” Her strong words were in response to the Republican Party searching for different avenues to discontinue federal funding of Planned Parenthood’s abortion clinics.

Clinton Stated, “I would like these Republican candidates to look the mom in the eye who caught her breast cancer early because she was able to get a screening for cancer, or the teenager who didn’t get pregnant because she had access to contraception, or anyone who’s ever been protected by an HIV test. Now, extreme views about women? We expect that from some of the terrorist groups. We expect that from people who don’t want to live in the modern world, but it’s a little hard to take coming from Republicans who want to be the president of the United States, yet they espouse out-of-date and out-of-touch policies. They are dead wrong for 21st-century America. We’re going forward. We’re not going back.”

As of yet, I have found no evidence to support her absurd accusation. I have not heard or read about any Republican using terrorism in the pursuit of political aims. Not once have I heard or read that any candidate has used violence or threats to intimidate or coerce women nor selling women as sex slaves or asking them to be accompanied by a male chaperon at all times. These, of course, are just a couple examples of a terrorist.

But Hillary, if I do hear one of your opponents using terrorist methods against women I’ll be the first to apologize to you for doubting your judgment. 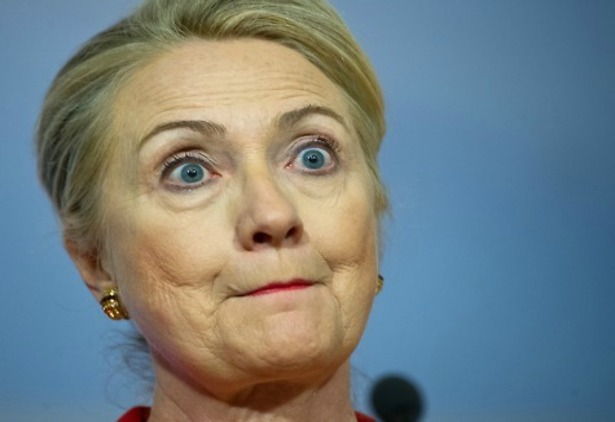