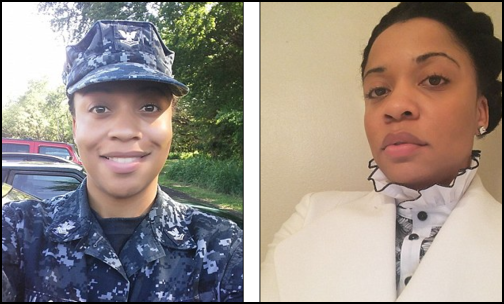 Intelligence specialist Navy Reserve, Petty Officer 2nd Class Janaye Ervin, finds herself at the center of controversy having failed to either salute or stand as the National Anthem played during the morning flag-raising at Pearl Harbor, and she isn’t the first.

Ervin, who is assigned in North Island, California’s Navy Operational Support Center was in Hawaii for an exercise at the time.

Threatened with jail time for her actions, Ervin tried to explain herself via a ‘since-deleted’ Facebook post, according to Daily Mail.

“I feel like a hypocrite singing about the ‘land of the free’ when I know that only applies to some Americans,” she wrote.

Ervin has also lost her security clearance for her stunt but assures that she “will gladly stand again, when ALL AMERICANS are afforded the same freedom.”

On Facebook, Ervin went on to say, “The Navy has decided to punish me for defending the Constitution and has taken away my equipment I need to do my Naval job.”

Ervin, however, is not the first service member to refuse to salute the flag. An unidentified sailor filmed herself at the Pensacola, Fla. Base during the morning ceremony also refusing to honor the Flag and National Anthem, according to Military.com.

This unidentified sailor is also under reprimand.

Those in the military have chosen their paths to protect and defend this great nation of ours, including showing their allegiance to our Flag, a selfless choice that can never be thanked enough or ever be repaid. This act of defiance, however, leaves many baffled and wondering at the implications of such actions.

As of yet, the Defense Department has not given service members any direction dealing with the protests.