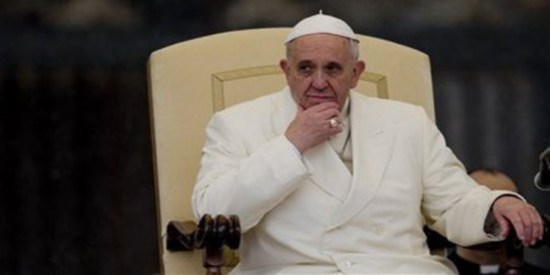 Two years into his reign, Pope Francis has emerged as an extreme socialist obsessed with the usual phony leftist problems such as man-made global warming, American institutional racism, and income inequality.

Muslims are indiscriminately slaughtering Christians around the world while Christianity itself seems on the verge of being eclipsed globally by Islam, but these things barely register with this pope.

This pseudo-intellectual pope keeps on spouting the same misanthropic Marxist platitudes as he hitches his papacy to global warming, the new international totalitarian cause. Sounding like Mao Zedong, Francis said a “bold cultural revolution” was needed to save the planet.

The pope ignores the keen insight of former Czech President Vaclav Klaus who likened environmentalists to watermelons: they are green on the outside and red on the inside. After the collapse of the Soviet Union leftists the world over migrated to the environmentalist movement and began regurgitating the party line, which is that human activity, and in particular, capitalism, is killing the planet. Mocking the Enlightenment, Francis accepts their unscientific drivel on faith and in the process transports the papacy back to the Dark Ages.

Christians and communists are the same, Francis maintains. Communists are closeted Christians who “have stolen our flag,” he says. Why the pope would want to be associated in any way with communists is unclear. He ought to know that it was V.I. Lenin who said, “The more representatives of the reactionary clergy we manage to shoot, the better.”

Lenin and his successors in the U.S.S.R. followed through. Priests, monks, and nuns were scalped, crucified, given Communion with molten lead, drowned, strangled, and thrown into cauldrons of boiling tar. In Republican Spain, nuns were raped before being shot, and people associated with the church were forced to swallow rosary beads, thrown down mine shafts, and made to dig their own graves before being buried alive in them.

Anyone with eyes knows that the proliferation of capitalism over the past two decades has lifted a billion people out of dire poverty — and in coming decades is projected to rescue another billion from pauperism — but Francis robotically slams global capitalism, or “globalization” as the Left calls it, foolishly blaming markets for poverty. Markets, not handouts, accomplish humanitarian feats that the Roman Catholic Church could never, ever hope to match.

It’s one thing to preach charity and warn against becoming preoccupied with worldly things, but the pope’s harangues suggest he actually believes capitalism, a system of abundance and uplift that is the greatest eliminator of poverty the world has ever known, exploits and punishes the poor.

Some of Pope Francis’s statements sound like they could have come from the deranged late dictator of Venezuela, Hugo Chavez. The pope condemns technology, including air conditioning and automobiles, along with consumerism, markets, inequality, waste, modernity, ideologies, urbanization, suburbs,multinational corporations, and financial speculation. Presumably he agrees with Bernie Sanders who said there are hungry children in the world because we have too many different varieties of deodorants.

The pope sometimes says things one might expect to hear coming from Michael Moore or Noam Chomsky. In one interview Francis ranted against capitalism like a rabid community organizer.