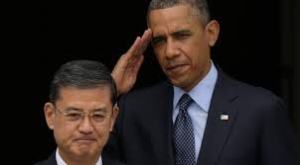 The Department of Veterans Affairs said on Monday just how deep the Rabbit Hole goes for the VA scheduling scandal.

The DVA substantiated claims that staff members were instructed to stage-manage records and that more than 57,000 former soldiers have been waiting, at the very least, 90 days for their first medical appointments. They also stated that another 64,000 have not visited a doctor in the network for ten years, even though they enrolled in the department’s health system.

Could it be our vets just gave up and stopped trying? Was that the ruse all along, the VA hospitals putting patients off so long that they simply threw their hands into the air in disgust? Think not? The Associated Press reported that “13 percent of VA schedulers reported supervisors telling them to falsify appointment dates to make waiting times appear shorter.” Those 13 percent are the only ones who came forward due to fear of reprisal.

731 VA hospitals and outpatient clinics stated they were instructed by their supervisors to falsify appointments to make it appear the wait time for patients was shorter.

“No Veteran should ever have to wait to receive the care they have earned through their service and sacrifice…We must work together to fix the unacceptable, systemic problems in accessing VA healthcare,” stated Acting Secretary of Veterans Affairs, Sloan D. Gibson. Most Americans are wondering how this could have happened to our vets in the first place.

The original Top Priority goal of the department, to make sure patients are seen within 14 days, has been abandoned because the audit exposed it would be “unattainable given the growing demand among veterans for health care.”

The VA report outlined actions that they will be taking including holding employees and officials responsible for any record manipulation. They will also be held accountable for stopping new hiring at the Veterans Health Administration in Washington, D.C. and will be liable for 2 published reports each month on wait times.

Gibson also stated that VA representatives have gotten in touch with 50,000 veterans to get them off the waiting lists and are contacting another 40,000 more and many Americans wonder how all the new vets will possibly have a chance to be seen when the system is already overloaded.

A proposal by Senate Veterans Affairs Committee Chairman Bernie Sanders and Sen. John McCain would permit veterans who have endured long wait times to search for appointments at non-VA hospitals and clinics. The proposal will also provide about $500 million in order to hire more doctors and nurses and permitting the VA to lease 26 facilities in 18 states.

Gibson stated that the department “must be an organization built on transparency and accountability.”

According to Huff Post Politics, “The report issued Monday offers a broader picture of that overall system. The audit includes interviews with more than 3,772 employees nationwide between May 12 and June 3. Respondents at 14 sites reported having been sanctioned or punished over scheduling practices.”

Many veterans groups believe the report emphasizes the need for rapid and severe change within the system. “This audit is absolutely infuriating, and underscores the depth of this scandal,” stated the chief executive of Iraq and Afghanistan Veterans of America, Paul Rieckhoff. He went on to say that President Obama should be “out-front in reforming the VA.”

Gibson stated, “I will not be part of some effort to maintain the status quo here.” It may take “one veteran at a time” but he believes the agency will restore trust in the system.

VA Secretary Eric Shinseki held himself responsible condemning the system as having “a lack of integrity” and resigned on May 30.

By Lorra B. Chief writer for Silent Soldier

5 thoughts on “Just How Deep Does the VA Rabbit Hole Go?”